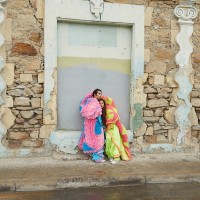 The album, recorded in its entirety in Raquel’s and Luis Alfredo’s home studio in Puerto Rico, is an emotional rollercoaster in which they face and ponder the issues affecting them and Puerto Rican society at large.

They also enlisted their dear friend Roberto Carlos Lange, aka Helado Negro, to contribute an orchestral arrangement for ‘Club Tú y Yo’.