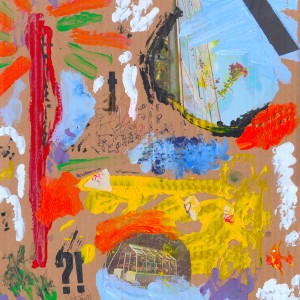 Those in glass houses shouldn’t throw stones, but The Cool Greenhouse are about to shatter glass ceilings with their self-titled debut LP.

“I wanted to hear repetitive music that wasn’t pretentious” tells the band’s voice Tom Greenhouse of his personal agenda to inject some pop sentimentality into the rock’n’roll textbook. “The mission was to make long, repetitive pop music that wasn’t boring. I soon realised I could do that through focusing on the lyrics.”

With phrases culled from the pages of his many notebooks, Greenhouse has a way with words. Exploring Rotary Club jumble sales and mausoleums or making futuristic voyages into musical VR, his songs dig at the gammon classes and scoff at the stupidity of society alongside pop punches about female harassment. Inspired by conversations and magazine articles he narrates upon the world as he sees it, preferring wise-cracks and judgement to merely passing comment. “At school I wrote a story about a whale that fell in love with a submarine and tried to have sex with it which almost caused a serious nuclear meltdown; it won a prize. As a teenager I thought I was Arthur Rimbaud so moved to Paris and wrote terrible poetry.”

Down and out in Paris and later, in London, Tom got skint fast so headed to the sticks of Norwich. Sitting in his garden, inspired to turn scripture into song and record it on a friend’s tape recorder, he began penning the album between writing clickbait articles to get by and turned to humour to express his deeper thoughts; “A lot of punk is on the nose like “fuck the Tories” but I’m not that hardcore. Humour is good for talking about serious things without getting too sentimental.”

Encouraged by The Shadow Ring’s Graham Lambkin (“I wrote to him asking whether it was worth the bother. He sent a really nice reply. He probably doesn’t remember, but it spurred me on.”), Tom took to the live circuit, but his solo backing track performances needed a fuller sound. Ahead of securing a show with The Stroppies, he turned to the talent of guitarist Tom O Driscoll, bassist Thom Mason, drummer and percussionist Kevin Barthelemy and Merlin Nova on keys and synths, harmonium, melodica, violin and backing vocals. “We practiced the songs and played that first show; we did a good job and Melodic signed us! Those guys are crazy,” Tom says. Perhaps not; also championed by DIY it could be a sign of things to come as the band prepare for their Great Escape debut.

Discovering The Cool Greenhouse’s first 7” (which coincidentally mentioned his own surname) ace producer, sound engineer and mixer Phil Booth (Sleaford Mods, Jake Bugg) invited the group to his JT Soar studio in Nottingham. The old potato-packing warehouse offered an idiosyncratic working method for the band, who recorded the album over 7 days as live between kipping on its couches, 4am whiskey-soaked sessions and Mario Kart ’64 on demand. “Phil’s got all the kit and know-how, but the studio is rough around the edges with great character,” Tom tells. “There were weird little synchronistic miracles… discussing a song then seeing its title on a shop window, finding things in pubs straight out of our songs… these zapped me onto some sort of Jungian plane where I didn’t need sleep and knew just what to do.”

Blissfully instinctive, Tom’s lexicon flies across the album with the agitation of an internal monologue that won’t quit. From pop culture to cautionary tales, anything deemed too musically extravagant was swiftly removed before being mastered by Mikey Young (Bodega, Amyl and the Sniffers); “we added a tympani and clarinet but ended up taking it all off again” At times the Truman Show-trappings of ‘Trojan Horse’ or ‘Gum’s unsettling cowbell hint at the motoric. For now, whatever it is that gets you going, let’s just call it The Cool Greenhouse effect.