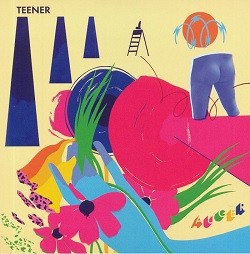 Teener is a noise rock band from Detroit, Michigan. Formed in 2016, they set out to make loud music without emulating any style or artist. So far, the result is a sound that walks a line between New Wave, Noise Rock and Hardcore.

The lead A-side song, titled The Ladder, kicks off with perforated, ascending drum and guitar and a vocal shitstorm interspersed with melody-driven guitar solos. Though the kicker and the song’s namesake, is the final 30 seconds, where vocalist Ollie Dodt reenacts what sounds like an all too familiar one-sided conversation - a young person having to push and push and push for the opportunity to have a foot on the professional ladder.

The second song on the first side, Market Value, is a heavier chugging number slamming the effects of Detroit’s fracking and toxic matter “processing”, bubbling down into only vocals and feedback by the end. B-side Flavor begins with frenzied, booming toms and chainsaw guitars, only to break down about a minute in to a post-punky, drony haze. And suddenly, the clap of the toms and guitars return for a hyperkinetic finale.