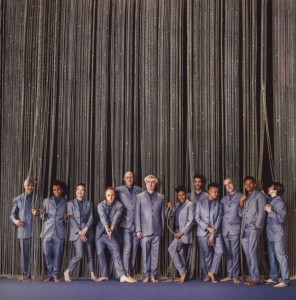 Nonesuch releases the cast album for the critically acclaimed Broadway production of David Byrne’s American Utopia, with music and lyrics by David Byrne. American Utopia began as an album, also released by Nonesuch, which received a Grammy nomination and was the first by Byrne to reach #1 on the Album Chart; it was also his first to reach the Top Five on the Billboard 200 chart. The concert tour in support of American Utopia, which inspired the Broadway show, included songs from the new album along with music from Talking Heads and Byrne’s solo career. Byrne and the ensemble performed more than 150 dates in twenty-seven countries over nine months. The NME said it ‘may just be the best live show of all time.’

David Byrne’s American Utopia is the once-in-a-lifetime Broadway event that delivers ‘an experience unlike anything else’ (Billboard) and marks a major cultural milestone in the worlds of music and theatre. Innovative pop/rock icon David Byrne (Talking Heads, Here Lies Love) shares the spotlight with a diverse ensemble of eleven musical artists from around the globe to deliver ‘a marvel of staging and motion’ (Chicago Tribune) that’s a ‘thought-provoking example of the power of live music’ (Forbes).