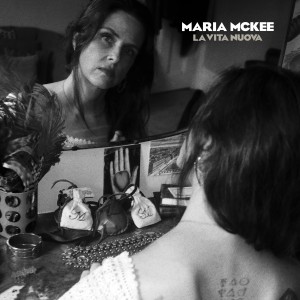 Maria McKee has been out of the proverbial spotlight for some time, her creative talents re-engaging with her first love of acting, performance and the musical tapestries that accompany such activities.

Candid and passionate, she’s, quite simply, had a beatific awakening and in a crescendo of prose, her new album ‘La Vita Nuova’ unlocks her story, sketching out her journey that started many moons ago when she sang in her bedroom with her older brother, the late, great musical innovator Bryan MacLean. Along the way she retooled punk and country in Lone Justice, released a string of evocative and eclectic solo records, wrote chart topping hits and touched millions of people before seemingly disappearing…

Some of the new album sounds like modern show tunes for musical extravaganzas that are still to be penned.

‘Little Beast’ is almost Disney-esque and ‘I Should Have Looked Away’ has a real stagey feel to it. Title track ‘La Vita Nouva’ and ‘Let Me Forget’ are all beautifully written stories of relationships in various states of evolution or disrepair. And, ‘However Worn’ is like a slice of American gothic.

A homage to new life, the completion of ‘La Vita Nuova’ saw Maria’s life entirely change and illustrates an important period in the artist’s life.

“It’s a really personal record; all I can do is tell my story. People can find their own meaning in it, taking them deeper, perhaps, into something they need to experience, I think that’s what music and art does.”

Side A:
A1 Effigy Of Salt
A2 Page Of Cups
A3 Let Me Forget
A4 I Should Have Looked Away

Side B:
B1 Right Down To The Heart Of London
B2 La Vita Nuova
B3 Little Beast

Side D:
D1 I Never Asked
D2 I Just Want To Know That You're Alright
D3 Weatherspace
D4 However Worn