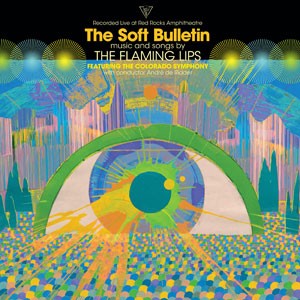 On 26th May 2016, The Flaming Lips performed their universally acclaimed 1999 album The Soft Bulletin in its entirety with the Colorado Symphony at Red Rocks Amphitheatre in Morrison, Colorado. This particular event has been regarded by those in attendance as one of the most awe-inspiring, moving and magical moments of a lifetime. For the Lips and their fans, perhaps the apex of a magnificent interpretation that will remain as rewarding and emotionally-charged as it was that night in 2016. The Flaming Lips performed the 12-track album in its original sequence with new arrangements accompanied by a 69-piece orchestra and 56-strong chorus. The performance was conducted by the internationally celebrated conductor Andre De Ridder.

Now, the resulting live recording is being released to celebrate the 20th anniversary of The Soft Bulletin. The album was the band’s breakthrough moment and featured the hit singles “Race for the Prize” and “Waitin’ for a Superman.”

1. Race For The Prize
2. A Spoonful Weighs A Ton
3. The Spark That Bled
4. The Spiderbite Song
5. Buggin’
6. What Is The Light?
7. The Observer
8. Waitin’ For A Superman
9. Suddenly Everything Has Changed
10. The Gash
11. Feeling Yourself Disintegrate
12. Sleeping On The Roof