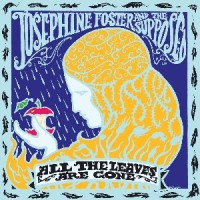 Could it be that the world is finally ready for the tempestuous folk-rock opera that is "All the Leaves are Gone?" In 2004, only the truly informed and forward-thinking heads "got" this mini masterpiece. Critics scratched their heads and usually resorted to comparisons of past artists, like ol Grace Slick and her Great Jefferson Society, Fairport Convention (but which era? SURELY Judy Dyble's early reign?), and at best, Shirley Collins. A few fans attempted to connect the record to even more obscure "freak folk/rock" like Mellow Candle, Fear Itself, or Trees. "All the Leaves are Gone" was made by unique personalities not concerned with influences or copying any bygone era. Surely, some things are in our DNA or even early childhood, as Josephine Foster's roots in opera manifest themselves as much as any other influence in this organic song cycle. Sure, guitarist Brian Goodman may have heard Richard Thompson before, but his alchemical and molten guitar spray is purely his own, in tunings and intervals still not meant for normal humans to understand, mostly because his 2004 guts were poured into every sublime note (I think even Brian himself never even understood how good he was). That fiery emotion is also in every nuance of Foster's songs--like life, there's disquieting, jagged moments of unease, and there's calm both before and after the storm. There are moments of utter gentleness along the journey---because yes, every concept album should be a voyage, and this is one everyone should take. - Steve Krakow

Well-Heeled Men
The Most Loved One
All The Leaves Are Gone
Nana, Deathknell
Silly Song
Jailbird (Hero Of The Sorrow)
Worried And Sorry
Who Will Feel Bitter At The Days End?
John Ave
Seen From The Gray Train
Don't Wait Mary Jane
(You Are Worth) A Million Dollars