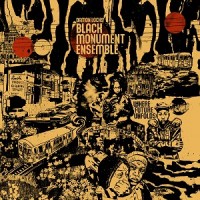 Where Future Unfolds is a new work spirited by Chicago-based sound & visual artist Damon Locks. Starting as a solo sound collage piece (where Locks pulled samples from Civil Rights era speeches and recordings to create an improvisational pallet for performance on his drum machine), over 4 years the project has blossomed into his 15-piece Black Monument Ensemble – featuring musicians (including Angel Bat Dawid on clarinets and Dana Hall on drums), singers (alumni of the Chicago Children's Choir), and dancers (members of Chicago youth dance company Move Me Soul). Where Future Unfolds is a live capture of the ensemble's epic debut at the Garfield Park Botanical Conservatory on the West Side of Chicago. Recalling the spirits of Phil Cohran's Artistic Heritage Ensemble, Eddie Gale's Black Rhythm Happening, Archie Shepp's Attica Blues, and Public Enemy's It Takes a Nation of Millions to Hold Us Back, the album presents an inspired, innovative & immediate intersection of gospel, jazz, activism & 808 breaks.

A1. Statement Of Intent / Black Monument Theme
A2. Sounds Like Now
A3. Solar Power
A4. Rebuild A Nation
A5. Which I Believe It Will
B1. Which I Believe I Am
B2. The Colors That You Bring
B3. The Future?
B4. Power
B5. From A Spark To A Fire