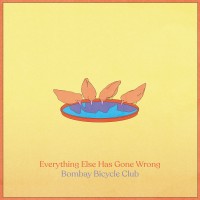 “Everything Else Has Gone Wrong” is the eagerly anticipated follow-up to their fourth album, ‘So Long, See You Tomorrow’ released back in 2014.

The new album was largely recorded out in the US alongside Grammy Award winning producer John Congleton (St. Vincent/Sharon Van Etten/War on Drugs).

Speaking of the record’s title, vocalist/guitarist Jack Steadman explains: “This is an album for anyone who’s ever turned to music in a time of need. It’s about the solace one can get from listening to music or playing music. For me personally it's about the frustration of not being able to express myself to others, of leaving conversations feeling dissatisfied and misunderstood. Music’s the way I’m able to truly express myself”.

Bombay Bicycle Club have continued to grow, develop and evolve since the release of their debut album, “I Had The Blues But I Shook Them Loose”, back in 2009 when they signalled their arrival as young teenagers. With an innate ear for melody and invention, the four-piece make a very welcome return.

Barry says: There have been a good run of massive synth albums from returning feel-good artists of the mid 00's and Bombay Bicycle Club are the latest and possibly most welcome of those returns. Huge neon synths, stadium echoes and hand-waving choruses bring to mind their seminal earlier works (our man Forbes is a big fan), while pushing things firmly into the 20's with crisp, crystalline production.