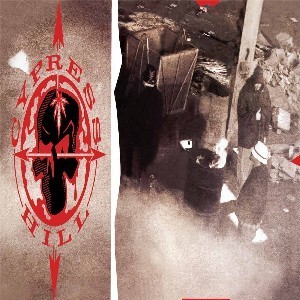 Cypress Hill’s self-titled debut album was hard as nails, with very few pop concessions. There was humor, but it was laced by cackling, homicidal sneering. Not well known outside of the hardcore hip-hop scene at first, faces of the three group members weren’t usually shown clearly in press photos; they preferred the shadows. As their first singles began hitting the airwaves and record racks, the press and music fans started to take notice. From the opening notes of the group’s first single, “The Phuncky Feel One,” to deeper album cuts like “Stoned Is The Way Of The Walk” and “Tres Equis,” it was clear that Cypress Hill was something different. And very, very dope. The world Cypress Hill espoused was gang-ridden and far from cheery, but they managed to laugh through the pain. Lead rapper B-Real took each fuzzed-out, rock-hard DJ Muggs beat as a challenge, jumping around it like a spark off a joint as it makes its way to the concrete.

MC Sen Dog always had B-Real’s back, to bring intensity and a no-bullshit gruffness that made the group both menacing and unpredictable. When they introduced percussionist Eric Bobo to the mix in the early 90s, it brought new dimension to the band, making their live performances one of the most unique and accomplished shows in hip-hop. Journalist and author Chris Faraone highlights the group’s relationship in the reissue’s liner notes (which is included only in limited edition Skull) saying, “[By the late ‘80s] the undisputed Cypress unit finally formed. B and Sen realized that their diametric styles - the latter’s deep wrangle, the former’s inimitable high notes - complemented one another righteously. By then Muggs had bangers in the bag, as well as industry experience from a jaunt with the New York duo 7A3. B and Sen waited while Muggs messed with 7A3, and in that time began to build the blueprint for their raucous and weeded no-holds-barred style. Besides getting schooled on industry pitfalls, Muggs had also grown into hip-hop’s most formidable young producer, while straddling the bi-coastal gap.” Cypress Hill’s debut went gold by the end of 1991 and has since pushed past double platinum status, making it the first album for a Latino-American hip hop group to do so. The album received raves from the likes of Rolling Stone and the Los Angeles Times, saw a #1 Hot Rap Single with the release of “The Phuncky One” and helped the band win Artist Of The Year at the 1992 Source Awards. After 25 years, it should come as no surprise that Cypress Hill is a cornerstone of the group’s live set to this day.

B1. Real Estate
B2. Stoned Is The Way Of The Walk
B3. Psychobetabuckdown
B4. Something For The Blunted
B5. Latin Lingo
B6. The Funny Cypress Hill Shit
B7. Tres Equis
B8. Born To Get Busy