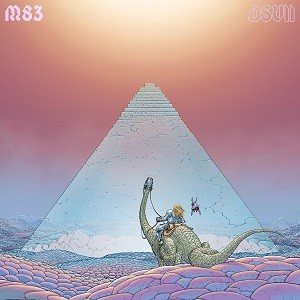 M83 mastermind Anthony Gonzalez released Digital Shades Vol. 1 in 2007 as a compendium of unused ambient tracks for diehard fans to enjoy rather than letting these works disappear into the void. It was a way to breathe life into songs that normally would not see the light of day as well as a vehicle for Gonzalez to explore areas of musical creativity separated from the pop-leaning M83 studio albums. Gonzalez credits Brian Eno’s ambient collections as a primary inspiration for the creation of the Digital Shades series. Now, more than a decade later, M83 has returned with the latest installment of Digital Shades - one that adopts a grander nature and seeks to transport listeners to another time and place entirely. DSVII is influenced heavily by early video game soundtracks, ‘80s sci-fi/fantasy films and analog synth pioneers such as the aforementioned Brian Eno in addition to Suzanne Ciani, Mort Garson and John Carpenter.

Barry says: I have to admit to being mildly (not mildly) confused when I saw the video for 'Temple Of Sorrow' but then remembered, this is pretty much what Gonzalez does. Massive, operatic instrumental music, euphoric dream-state rock and absolute ego dissolving lysergic 'tron. Mental, but thoroughly brilliant.