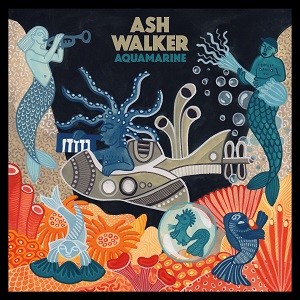 ‘Aquamarine’ is a projection and culmination of all he’s absorbed. A cosmic explosion of sound and colour, rhythm, shape and patterns. The arrival of an unassuming dreamer now projecting his unique flavour of expression. ‘Aqua- marine’ is the take-off of this audial spaceship, a sound discovered in the grooves of thousands of records, united in one. A meditation designed to inspire good energy, Ash hopes to bring a sense of calm and tranquility to the listener amongst the chaos of life. Recorded at home with the freedom of time and space, it combines analogue with digital, and a fondness for normally unwanted shapes and textures such as fuzz, hiss and crackle.

“My previous albums have felt to me more like ventures on land. This one feels more like a deep sea voyage into the subconscious. Living to dream with visions of grandeur. Manifesting a beautiful path to walk on. It was inspired by everything around me, from friends and family to art and design, engineering and architecture, movement and how we use our five senses. I love to try and push my own boundaries of what I perceive to be right and wrong, seeing mistakes as innovations, and obstacles as inspiration.”

Highlights on the album include ‘Under The Sun’, ‘Time’ and ‘Finishing Touch’, all of which feature the smooth and silky voice of Laville. Themes of metaphysical exploration and transportation re-occur in the cosmic jazz of ‘Brave New World’ and the smoked beats on ‘Come With Us’. Also featured across the album are trumpet and flugel-horn genius Yazz Ahmed, bassist Marc Cyril (Keziah Jones, Jr Walker & The All Stars) and renowned musician and producer Jonathan Shorten.

Barry says: Mixing elements of downbeat, hip-hop and a healthy dose of soul, 'Aquamarine' is another superb outing for the ever-talented Ash Walker. Shadowy beats clash with reverbed guitar and echoing vocals before breaking into loungy slow-jazz and heady opium-den instrumentals. It actually confounds all genre expectations and is all the better for it. Proper lovely.