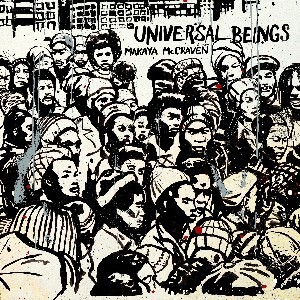 Drummer/producer Makaya McCraven’s epic 2018 album Universal Beings was a breakthrough release – both for Makaya as an artist and also for an entire class of “new jazz” artists who in recent years have been making waves from Chicago to New York to London and Los Angeles. Featuring an all-star cast of genreredefining players (incl. Shabaka Hutchings, Nubya Garcia, Miguel Atwood-Ferguson, Tomeka Reid, Joel Ross, Brandee Younger, Jeff Parker…) recorded in the four aforementioned cities, the music of Universal Beings was composed in collective improvisational sessions before being post-produced by McCraven into twenty-two lyrical instrumental pieces of “organic beat music.”

Millie says: If you missed this the first time around then you’re in luck, the Universal Beings re-release is here to save the day. Filled to the brim with beautiful jazz and featuring lots of inspirational names in the New Jazz era such as Nubya Garcia & Shabaka Hutchings and many more talented contributors. Delve into the four sections to guide you away to different parts of the world and float away on a jazzy-cloud.

Chicago Side:
B1. Pharaoh's Intro
B2. Atlantic Black
B3. Inner Flight
B4. Wise Man, Wiser Woman
B5. Prosperity's Fear