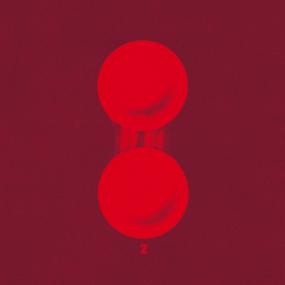 One of the many musical entities the French collective Simple Music Experience sent to earth to vociferate electronic incantations, Radiante Pourpre is the name of a duo comprised of Alex and Leopold as well as the name of their 2017 debut album on Antinote. Last year, they have released an acclaimed LP on Kneklehuis under another moniker, Violent Quand On Aime, but the place from which they keep on transmitting musical signals has not changed: a post-exotic world ("No Zone") where the only remains of the societies we live in are barbwires, battered radio transmitters ("Takato") and deserted oil rigs the duo uses as fictional shelters.

From their precarious haven, they send us field recordings of waves mixed with analog glitters ("Interlude"). From their lost at sea run down tower, they record the cries of ominous seagulls ("Small Talk") and a bewitching Spanish voice ("Mala 800"), incorporating these to primitive drum machine patterns… And then…

A miracle happens when the record is flipped: a Balearic hit for post-apocalyptic times ("Lemanja")! Begining exactly like the opening track ("The Cops, The Jazz, The Birds"), in an unexpected twist of fate, it summons the angelic voice of Galadriel Andrade for a delicate Brazilian conjuration. There might even be a sunny spell lurking in the spirited closing tune ("Ms Butterfly"): “No Borders, No Cops, No Problems”.