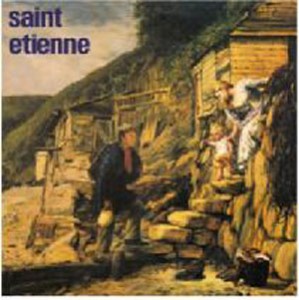 To mark its 25th anniversary, Saint Etienne announce details of the release of a very special box set of one of their most critically acclaimed albums, ‘Tiger Bay’.

The lavish set includes: vinyl version of the original album in gatefold sleeve cut at 45rpm over two discs; ‘Tiger Bay - Remains Of The Day’, a 12 track vinyl compilation of rarities and demos; ‘Tiger Bay - Tapestry’, a 13 track CD album of ‘stripped-back’ versions and unreleased arrangements taken from original master tapes and complied by Pete Wiggs; a 28-page booklet featuring a wealth of unseen photographs plus an essay about the making of the album; a 12” x 24” reproduction of the original album poster and a reproduction of the original press release and biography from 1994. Also includes sticker and digital download album code.

A ground-breaking blend of electronica and orchestration with traditional folk melodies, ‘Tiger Bay’, their third studio album, was originally released on 28th February 1994 on Heavenly.

Saint Etienne set themselves a bold challenge for their third album. No more records about London; no more samples - of music they loved, or snippets of film dialogue between tracks. They would change the genes of their music, swapping the helix of Madchester meets Swinging London meets indiepop for one in which Belgian techno was spliced with folk music.

‘Tiger Bay’ was intended to be nothing less than the sound of folk music reimagined for the last years of the 20th Century. Their brilliant reinvention of folk rock for the electronic age might not have resulted in an invitation to headline Fairport’s Cropredy Convention but it gave them their best album yet.

‘Tiger Bay’ slipped beneath the sands - neither an indelible hit nor a memorable flop - but that gives it a staying power, perhaps, that its predecessors lack: it doesn’t sound of its moment in the same way ‘Foxbase Alpha’ and ‘So Tough’ do. It sounds as if Saint Etienne had finally broken free of pop time, to create something that floated above pop trends, borrowing and squeezing together elements that should never have blended. It might even be their masterpiece.