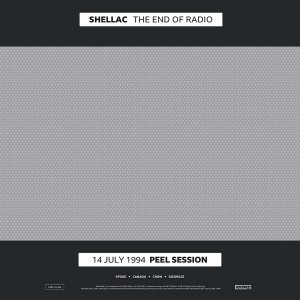 Both the 2LP and the 2CD version are packaged in a top-load single pocket wide-spine jacket with two printed inner sleeves.

Audio quality is paramount, as always, with Shellac. The LP was mastered by Chicago Mastering Service. The vinyl is manufactured at RTI in Camarillo, CA. The pressings are 180 gram audiophile quality.

Other than the informational sheet you hold in your hand (or virtual hand), this record will have no formal promotion. There will be no advertisements, no press or radio promotion, no promotional or review copies, no promotional gimmick items, and otherwise no free lunch. Photos of the band are available. And the band is available for email or telephone interviews.

The band will continue to play shows or tour at the same sporadic and relaxed pace as always. There is no correlation between shows and record releases.

Barry says: There's not much to say about Shellac that you won't already know, but it's safe to say that hearing a band this legendary in top form, for the late great John Peel is enough of a draw. It's an incendiary and mindblowing set, comprised of some of their most recognisable pieces. Recorded perfectly, and performed as if you were there. Essential purchase.