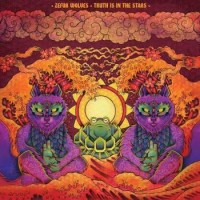 After a break of two years, Zefur Wolves return with a brand new album, beating a path to the promised 2019 follow up to their acclaimed debut. The three-piece’s distinct brand of languid, emotive, alt-rock takes the commanding role with Truth is in the Stars, released on Strangetown Records.

The band have once again teamed up with M h of human consciousness and empathetic resistance to injustice. r. Kobo who hasn't disappointed with the beautiful and intricate sleeve artwork and lovingly presented by Mark James Works. For the audiophiles the gorgeous deep berry coloured vinyl will be a feast for the eyes as well as the ears.

Studio sessions helmed by producer and former live band member, Super Furry Animal’s Cian Ciarán, have driven the band to greater intricacy and an audible sense of playfulness, toying with compositional and recording technique. Having crafted their debut album in California, evocative of their cited inspirations including Spiritualized and Beach House, the upbeat trailblazing first single Flying High, recorded at Strangetown Studios in Caridff, suggests new and fertile creative ground has been found to ‘one up’ an already glinting reputation

Barry says: For all of you that love the thrashing, but cohesive madness of the Lovely Eggs, the Zefur Wolves are here to brighten up your day. Throbbing guitars and snapping percussion are coated in an entirely non-eggy haze of shoegazing distortion and extended reverb. Thoroughly brilliant.