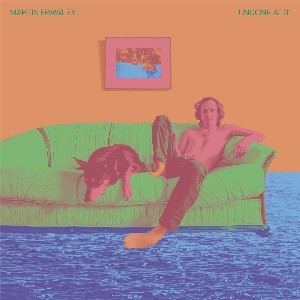 Undone at 31 is Martin Frawley’s solo debut Martin Frawley is co-leader of Melbourne Australia’s Twerps, formed in 2008 & shortly thereafter named Best New Band in Australia via Uncut Magazine. Named for the year in his life when the bottom fell out following a long-term romantic partnership, Melbourne’s Martin Frawley (Twerps) sequenced Undone at 31 chronologically to emphasize his journey. He took time off from drinking after mistakes and missteps in his Australian pubs, as chronicled on “End of the Bar,” an early standout that’s equal parts Velvet Underground cool and outlaw country.

While visiting Brooklyn during that period, Frawley found a collaborator in Stewart Bronaugh (Angel Olsen, Lionlimb) who, as he says, “gave me confidence and strength when I needed it the most,” and after bonding over albums by John Cale, Anna Domino, and Frank Ocean, “knew where I needed to take the music.” Those familiar with Frawley’s time as co-leader of Twerps will take comfort in hearing his deceptively simple songwriting is still intact, but the big reveal here is how new instrumentation and influences seamlessly expand Frawley’s playground. It might take several listens for one to realize Frawley is singing “Something About Me” over just violin, Moog, and a Graceland-esque bassline, or to appreciate the PB+J pairing of Fender Rhodes and lap steel on “Where the Heart Is,” which serves as Undone at 31’s twist ending.

Frawley’s album does not shy away from morbid musings and raw emotions that come with a breakup, and like Shoot Out the Lights or Sea Change, Undone at 31’s tunefulness and exploration combined are what elevate the music above the melancholy subject matter. You don’t need an album (or its bio, for that matter) to tell you change is inevitable. But with Undone at 31, our new protagonist summons the courage and perspective to unpack and share his experience in the hopes that in spurring himself to carry on, he inspires his listeners as well. Because as Martin writes, “That’s what you want, right? To learn. I felt up, down, scared, and now I’m really scared of what I have made and what people will think, but I’d rather that than any other feeling.”