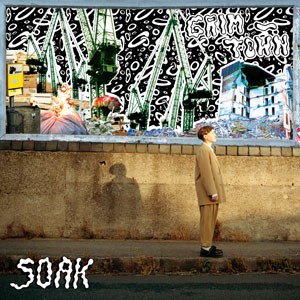 SOAK returns after 4 years with a new album, bringing with her 4 years worth of growth, introspection and understanding. The result is Grim Town, the follow-up to her Mercury Music Prize-nominated debut Before We Forgot How To Dream, which saw her win the prestigious Choice Music Prize for Album of the Year, the Northern Irish Music Prize, and the European Border Breaker Award, in addition to being shortlisted for a Q Award.

Her astonishingly assured, emotionally mature songwriting was often hailed as wise beyond its years; but, as her new album often asks, when do we ever truly shake off those childlike fears, the imposter-syndrome, the outsider-status? The term ‘to come of age’ lands with so much expectation, but with Grim Town, Bridie dissolves all such assuredness with imaginative, ambitious, and cathartic results. It is almost as though the greater soundscape - heavier in places, more pop-focused in others - has given SOAK the confidence to put her long overdue introspections in the firing line. It’s beauty and brutality is there from the album open opener, ‘Get Set Go Kid’ which traces the train-tracks out of depression (“I’ve got to get out, I can’t live here anymore!”) and was as inspired by the audio-visual environmentalism of Pink Floyd’s ‘The Wall’ as Bridie’s train-obsessed grandad on voiceover duties.

Barry says: Grim Town is the newest album from Soak in 4 years, and displays a much more mature and thematically consistent side to Monds-Watson's sound. Still encompassing the punky chord sequences but with a much more nuanced and musically diverse backdrop, shimmering and soaring before bringing things back to earth with minimal guitar pieces, accentuated only by those unmistakable vox.