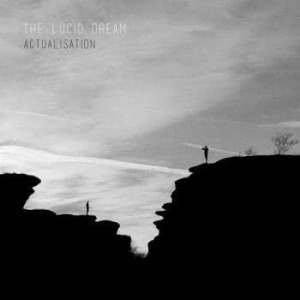 Driven by fans raising £10,000 to help replace all equipment robbed after a Paris show in early 2017, a new album became the instant focus in the summer of 2017 for a rejuvenated The Lucid Dream.

‘Actualisation’ is soaked in the influence of acid house, amalgamated with dub and kosmische. It will again see them acknowledged for venturing into pastures new, setting themselves apart from ‘genres’, ‘scenes’ or what any other act are currently doing.

The album was penned over the summer of 2017 by Mark Emmerson (vocals/guitar/synths), using only the classic Roland 303/808 synths, bass and vocals as tools for writing. Inspiration for the writing was formed via continuous listening to the Chicago to UK acid house works of 1986-1992, the focus predominantly on the groove.

Several months on from those writing sessions and The Lucid Dream have completed their 4th album in 5 years. A record made for the dancefloor.

The confrontational techno-punk of ‘Alone In Fear’ opens the album, a 9-minute attack fuelled by the frustration and anger spawned by Brexit, government and a realisation of what 2018 Britain currently is.
Recent single ‘SX1000’ (the first work from the album, unveiled via 12' vinyl in April this year) is the band’s first move into pure acid house. The acid house fusion runs throughout the record, represented furthermore by ‘Ardency’, a track already praised by live critics when aired live for the first time earlier this year as ‘even on first hearing, would’ve raised the roof of The Hacienda’.

The 2-part opus of ‘Zenith’ follows, commencing with a space-dub/house instrumental groove before building into a track that will go for your head as much as your hips. Only ‘Breakdown’ harks back to sounds of old for the band, a little reminder of the skull-crushing impact they can make when stripped to the bare bones. ‘No Sunlight Dub’ closes the album, a dark-dub that invites the classic acid-house tool (Roland 808) into the dub. The track makes a stop-off into drum ‘n’ bass/jungle along the way before rounding up in a manner suited to Lee Perry, King Tubby, Augustus Pablo and other Jamaican greats.

The Lucid Dream formed in Carlisle, Cumbria, in 2008. A string of sold-out 7″s was followed by the debut longer player, ‘Songs Of Lies and Deceit‘, in August 2013. The initial vinyl pressing of the debut album (500 copies) sold out within 2 days, and was backed by a main stage slot at Kendal Calling, and supports to Death In Vegas and A Place To Bury Strangers (full UK tour).

The bands 2nd album (‘The Lucid Dream’) was released in March 2015 to further acclaim. This included 2 BBC 6 Music sessions and plays across most shows on the station, as well as plays from BBC Radio 1 (Huw Stephens) and BBC Radio 2. Further press followed from Uncut, The Skinny, Louder Than War, and Drowned In Sound, who named the album #7 UK album of 2015. Supports to Clinic and A Place To Bury Strangers also coincided.

3rd album, ‘Compulsion Songs’ was released in September 2016, on Holy Are You Recordings. The vinyl pressing of the album sold-out within a day, prompting an immediate 2nd press, with pre-sales of the album topping 1,000 before release. The album was backed by a headline UK tour, and a main slot at Liverpool International Festival of Psychedelia (for which they were singled out for major plaudits from The Quietus, The Skinny and Drowned In Sound). The album again received acclaim from the likes of Mojo, Uncut, Classic Rock Magazine, BBC Radio 2 (Huey Morgan) and across the board on BBC 6 Music (Lauren Laverne, Marc Riley, Tom Ravenscroft, Gideon Coe, Stuart Maconie).

Barry says: Lucid dream just keep getting better. after 2016's 'Compulsions Songs', they've returned for this distorted, acidic slice of propulsive action. Half way between smooth Factory Floor-y techno and post-punky indie, these Carlisle bunch are making big waves. This one is killer.