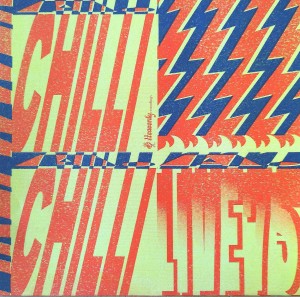 77:78, the new project from Aaron Fletcher & Tim Parkin, card-carrying members of the musical kaleidoscope that is The Bees, release Chilli, the latest track to be taken from their debut album, Jellies, which is released on Heavenly Recordings on Friday 6th July.

There's just 150 copies of this life affirming 7” featuring the original version of Chilli on the A side and on the flip a brilliantly nuts (and soon to be in-demand) remix by Dubwood Allstars.

Talking about the track, Aaron said:
"Chilli is just us being the sort of 70’s dirty ol’ roadhouse blues band that we always wanted to be....dressed in double denim and playing in a desert bar where the chilli is hot as rockets."

Here’s a quote from Dubwood Allstars:
"Looking forward to seeing 77:78 ...hope they're as good as when I saw them at The Fillmore in '75, managed to capture this stomping version of Chilli on my Nagra, been in the loft ever since…”