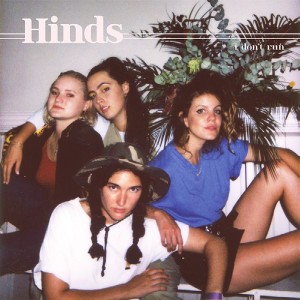 Spanish quartet Hinds - Carlotta Cosials, Ana Perrotte, Ade Martin and Amber Grimbergen - announce their long-awaited second record I Don’t Run. Out April 6 via Lucky Number, the new album shows a bigger, better, faster, funnier, more dexterous Hinds. Co-produced by the band and Gordon Raphael [The Strokes, Regina Spektor], and engineered by Shawn Everett [Alabama Shakes, Perfume Genius, The War On Drugs, John Legend], I Don’t Run is the product of a band fighting for their place, a band unwilling to rely upon their successes, a band who have just begun to prove themselves, and a band who plays hard but works even harder.

Some might expect them to write songs about being happy, young and carefree – “but we're not satisfied with that,” explains guitarist Ana Perrote. “On this album the struggles are clear. We want to be brave.” I Don’t Run is Hinds’ return with an honest reflection on a period that changed their lives beyond their wildest imaginations. After everything they’ve overcome, one might think a band like Hinds would have second album jitters, but think again. Hinds are chomping at the bit and with defiant confidence. “We loved making this album,” says Perrote. “We knew what we wanted and we have what we wanted. This is a new start for us and we're fucking ready.”