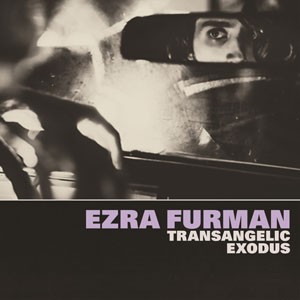 Transangelic Exodus, Ezra Furman’s second album for Bella Union, is a new landmark for the American singer-songwriter: “not a concept record, but almost a novel, or a cluster of stories on a theme, a combination of fiction and a half-true memoir,” according to its author. “A personal companion for a paranoid road trip. A queer outlaw saga.”

The music is as much of an intense, dramatic event, full of brilliant hooks, with an equally evolved approach to recorded sound to match Furman’s narrative vision. In honour of this shift, his backing band has been newly christened: The Boy-Friends are dead, long live The Visions. In other words, the man who embodies the title of his last album Perpetual Motion People is still on the move... Or in the vernacular of the new album, on the run.

“The narrative thread,” Furman declares, “is I’m in love with an angel, and a government is after us, and we have to leave home because angels are illegal, as is harbouring angels. The term ‘transangelic’ refers to the fact people become angels because they grow wings. They have an operation, and they’re transformed. And it causes panic because some people think it’s contagious, or it should just be outlawed.

“The album still works without the back story, though,” he vouches. “What’s essential is the mood - paranoid, authoritarian, the way certain people are stigmatised. It’s a theme in American life right now, and other so-called democracies.”

After “Perpetual Motion People” was released in July 2015, Furman had moved back from California (Oakland) to his home town of Chicago. But after a year, he returned to the west coast (Berkeley this time). “I just seem to keep moving,” he sighs. Still, Transangelic Exodus was mostly recorded – as all Furman's records have been since 2011 - at his bandmate (saxophonist/producer) Tim Sandusky’s Ballistico Studios in Chicago, and with the other Visions - Jorgen Jorgensen (bass, and on this album, cello), Ben Joseph (keyboards, guitar) and Sam Durkes (drums/percussion).

Just as Furman’s band hasn’t really changed, so his musical DNA remains intact – a thrilling, literate form of garage-punk rooted in The Velvet Underground, Jonathan Richman and ‘50s rock’n’roll. But Transangelic Exodus is noticeably different to its predecessors. “2016 was a hard year,” Furman recalls. “While the political and cultural conversation devolved in a very threatening way, we travelled and toured a lot. We saw ourselves coming to the end of what we were, and we wanted to become something new.”

“My previous records were original in their own way, but got classified as an off-kilter version of a retro band, and I wanted something that sounded more original,” he explains. “So we took time off touring, and made sure we took time with every song. I demoed with different band members, and then combined different demos – some parts even made the final album. So, the sound is more chopped up, edited, affected, rearranged.”

One prime example is the album’s lead single ‘Driving Down To LA’, a sparse, but explosive, mix of doo-wop and digital crunch. Another is the haunting ‘Compulsive Liar’. “I wrote it as a ballad on a classical acoustic guitar, but we made it stranger, which brought out the emotion of the lyric more than it would have in its original form,” Furman says. “It’s less predictable; you don’t know where the song might go, and that makes me happy.”

Furman once said, “The opening lines of my records tend to be summary statements.” So, what does, “I woke up bleeding in the crotch of a tree / TV blaring on the wall above the coffee machine” (from ‘Suck The Blood From My Wounds’) say about Transangelic Exodus? “I like the opening lines so much, I had to keep them even though they don’t make a lot of sense! You’re dropped into this story or situation, unsure where you are or what’s going on, and suddenly you’re moving. That’s what being alive feels like to me. Unknown and intense. It’s a big part of the record’s mood.”

Checking Furman’s successive album covers will show his personal journey, coming out as queer and gender-fluid, which the jagged, agitated ‘Maraschino-Red Dress $8.99 at Goodwill’ meets head on, namely “the painful experience of being a closeted gender-non-conforming person. Having ‘trans’ in the album title has a lot to do with being queer, like [album finale] ‘I Lost My Innocence’ [“…to a boy named Vincent”). That early experience marks the narrator for life. From a young age, because of issues surrounding gender and sexuality, I felt fated to have an outsider perspective. It radicalises you.”

Transangelic Exodus addresses another kind of coming out, as Furman addresses his Jewish faith on record much more openly than before, from the shivery ballad ‘God Lifts Up the Lowly’ (which includes a verse in Hebrew) to the exquisite ‘Psalm 151’ and the line “I believe in God but I don't believe we're getting out of this one” in ‘Come Here Get Away From Me’, a heady blend of rock’n’roll rumble and ghostly clarinet.

“There is a lot of longing and anger in those songs,” Furman reckons. “A longing for God, and God’s help, wondering how long this can go on. It feels like we’re in exile – the innocent, persecuted, oppressed and threatened. But it’s hard in pop culture to make explicitly religious statements, as many people – including myself - have been hurt by religion.”

Part of Furman’s motivation is the, “fear of fascist takeover,” expressed in the video to ‘Driving Down To L.A’ (filmed in Virginia, and uncannily storyboarded before the state’s infamous Charlottesville “Unite The Right” rally), as Ezra and his angel are pursued by modern-day Nazis. “At school, we learned all about the Holocaust, and were invited to imagine what would happen if the Nazis invaded again. As white supremacy has become more explicitly institutionalised in the US, my childhood nightmares have started to show up in songs.”

Crossing between love, gender, sexuality and religion, and singing in solidarity with the innocent, persecuted, oppressed and threatened, Ezra Furman has soundtracked the current fear and loathing across America like no other, while pushing ahead with his own agenda, always on the move.

Barry says: Furman's most fiery and conceptual piece yet, dealing with modern political and identity issues in a sensitive and clever way. Littered with moments of jaw-dropping songwriting and perfectly measured switches, Transangelic Exodus is another outstanding album from the ever-talented Furman.

Suck The Blood From My Wound
Driving Down To L.A
God Lifts Up The Lowly
No Place
The Great Unknown
Compulsive Liar
Maraschino-Red Dress $8.99 At Goodwill
From A Beach House
Love You So Bad
Come Here Get Away From Me
Peel My Orange Every Morning
Psalm 151
I Lost My Innocence