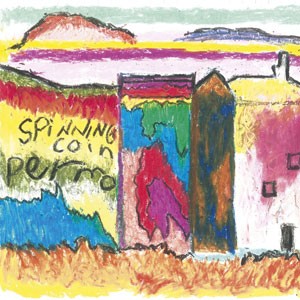 Recorded with Edwyn Collins at his AED Studios, and at Green Door Studio (the recording centre for the new wave of Glasgow artists) with Stu Evans, Permo is an album of bold steps and simple gestures, coming from a group who have found, seemingly effortlessly, a confident, unpretentious and egalitarian way of working together. Spinning Coin’s two songwriters - Sean Armstrong and Jack Mellin – oscillate taking centre stage on a song; Armstrong’s more melancholic melodies contrasting with Mellin’s urgent refrains.

The fourteen songs on Permo trace all kinds of terrain, though the overarching story might be that of a group looking for escapism, somehow and anyhow, in the midst of a social and cultural climate that’s closing down possibilities for difference and community.

It opens with the gorgeous ‘Raining On Hope Street’, an Armstrong song that was released on 7” earlier this year – there’s an undercurrent to the song, too, as Armstrong reflects that he wanted to write something “slightly spooky, ambiguous and open to interpretation”. ‘Tin’ follows, one of many Mellin songs that looks to the outside world and finds things wanting. “’Tin’ is trying to look at the two extremes of privilege and under-privilege,” he says. It’s a theme that Mellin returns to, with variation, over the course of the album – from the deceptively spry ‘Money Is A Drug’, whose flecks of country-soul charm conceals lyrics calling out ‘class war’ and ‘stupid rules’, through to ‘Powerful’, where Mellin takes on the possibilities of self-empowerment:

Spinning Coin write from lived experience, grounding their songs in an understanding that we’re all finding our way through the world, trying to figure out what the hell is going on out there. Armstrong takes on similar themes with ‘Starry Eyes’, and its blunt lines about how it’s not ‘the right time to celebrate, when people in the world are dying at the hands of the government’, but he also writes some of the album’s more peaceable songs, like the sleepwalking reverie of ’Metronome River’, or the driftwork of ‘Floating With You’.

Elsewhere on Permo, The Pastels’ Katrina Mitchell and Breakfast Muff’s Simone Wilson sing on ‘Be Free’ and ‘Running With The World’ respectively, plus the band have just welcomed new member Rachel Taylor. That’s a typically Spinning Coin development: a group fiercely engaged with community, welcoming new experience into their orbit, and looking for ways to move forwards with a warmth for humanity. It’s writ large across Permo – finding better ways to live, and to be together in the world, against the odds.

Spinning CoinVisions At The Stars