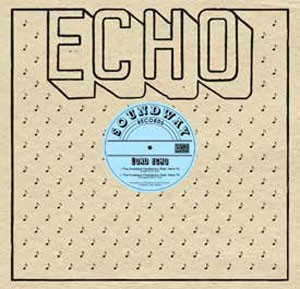 Lord Echo have quickly risen to fame through three impeccable albums which have seen New Zealand's Mike Fabs become a regular fixture in the more discernable record shops throughout the world. Three different mixes of "The Sweetest Meditation", taken from his "Harmonies" album released earlier this year. The A-side features the original mix (present here for the first time at 45RPM) alongside a re-vamped club version. Both allow the lucious arrangement and instrumentation plenty of room and space to make their impact. The song has a definite structure, with verses, choruses and instrumental bridge sections beautifully penned and well sequenced. I guess the club version buffs up the kick and the low end a bit more to carry it across the party island speaker stacks that this track so well deserves. On the flip Julien Dyne offers up his own intrepetation of the stems - keeping that upbeat funky vibe but switching up the instrumentation - replacing organic with electronic and adding bucket loads of synthy goodness. Finally, if you thought you'd had enough we get an excellent, tropical island 'dub' to complete the package.