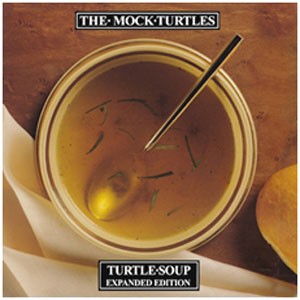 The band revolved around singer, songwriter and guitarist Martin Coogan (older brother of actor/comedian Steve), who blended his love of 70s glam and art rock (David Bowie, Be Bop Deluxe) with a nod towards the best in 60s music to create The Mock Turtles’ sound. From 1987 to 1990, the band made five singles (the ‘Pomona’ EP, ‘Wicker Man’, ‘And Then She Smiles’, ‘Lay Me Down’ and ‘Magic Boomerang’) and an album, Turtle Soup, for Manchester’s Imaginary Records, as well as a compilation 87-90. None of these has ever been reissued. Turtle Soup has subsequently been cited as one of the finest Manchester albums of all time. For this expanded reissue of Turtle Soup, which represents their complete Imaginary catalogue, all of the Mock Turtles’ non-album singles and B-sides are included, together with the many cover versions they recorded for Imaginary’s popular tribute albums (covering The Byrds, Jimi Hendrix, Syd Barrett, The Velvet Underground, Captain Beefheart and The Kinks). In addition, Martin Coogan has unearthed no less than fourteen previously unissued Mock Turtles demos from his personal archive! Sleeve-notes are by Mark Hodkinson (The Guardian, etc.), who was the first-ever journalist to review the band back in the mid-1980s. The package boasts the original versions of ‘Can You Dig It?’ (remained popular via various TV ads) and ‘And Then She Smiles’.