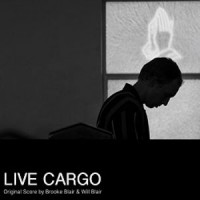 The last few years have been a rollercoaster ride for brothers Brooke Blair and Will Blair. In 2013 they scored Jeremy Saulnier's brutal revenge thriller Blue Ruin. Saulnier had been a longtime friend, and Blue Ruin also starred their brother Macon, as the slightly incompetent Dwight, looking to enact his revenge.

2015 saw the composers, actor and director reunited for the excellent and perhaps even more brutal Green Room.

This year, they've scored two new films for Netflix. Macon Blair's hilariously bloody I Don't Feel at Home In This World Anymore, and Small Crimes which has just premiered this past month.

Before these two latest projects, they worked on to score Logan Sandler's 2016 dramatic thriller Live Cargo. A dark monochrome thriller weaving together a plot of struggling relationships, child loss and the dark world of human trafficking. The Blairs worked closely with director Logan Sandler to capture the tone and texture of a particularly depraved way of life in the Bahamas. Violin bows were were used to resonate old piano strings, metal fans and acoustic guitars. Church organs and a small chamber choir provided a hymn-like chordal foundation. Distant lap steel guitars and accordions suggest somber melodies and slightly detuned vintage synths including an ARP 2500 and a mellotron create a sense of disorientation and uneasiness.
This vinyl edition is a co-release between Blackest Rainbow and Wayfind Records, the Blair's new label.

Brooke Blair & Will BlairBlood On Her Name