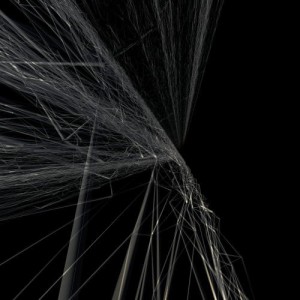 The album’s starting point was a series of acoustic improvisations recorded in a variety of locations, from a 700-year-old chapel in the Devon countryside to a basement studio in Reykjavík, Iceland. In an attempt to create a fractured sense of space reflective of the digital condition, the duo found themselves working within a place that could only exist in the digital landscape. By crushing the recordings through a hundred different virtual rooms of reverb and other chaotic digital processes they collided, soared and splintered into sweeping new rhythms, melodies and drones. Pushing the computer’s processor beyond its limits threw up sonic ‘errors’ that wouldn’t be easily possible to create through standard methods. In response, these outcomes created new and unplanned inspiration for further composition. Elements of the album were then produced binaurally adding a three dimensional listening experience. The outcome is a unique landscape that blurs the line between the virtual and physical worlds.