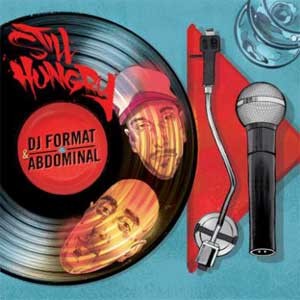 For fourteen years, DJ Format and rapper Abdominal have been entertaining crowds from Toronto to the UK. Now the hip-hop stars are back at it in 2017 with their new album "Still Hungry". While they both have collaborated on each other's solo records, "Still Hungry" marks their first joint album. Still Hungry boasts the best of what Format and Abs bring to the hip-hop community: funky, up-tempo and slick beats, coupled with intelligent, savvy lyrics. The album also showcases a grittier, harder sound, reflecting the maturity of the two artists, giving their audience some head-bobbing bangers that could rock any concert hall. Format and Abs have contributed to each other's albums, with Abs providing slick verses on Format's debut album "Music for the Mature B-Boy", and Format producing tracks on Abdominal's debut release "Escape from the Pigeon Hole". In 2003 they provided support for Jurassic 5's European tour, and then continued touring together as headliners based on how hype crowds became when they took the stage. Together, they have toured the UK more than twenty times to sold-out crowds. They have rocked stages such as Glastonbury Festival, Boomtown Festival and the iconic Jazz Café and Brixton Academy venues in London. They have also brought their high-energy shows to Australia and across Europe several times over the past fifteen years. Like any memorable hip-hop team, DJ Format & Abdominal have found success by working off each other's strengths and giving the global hip-hop community a unique and funky sound destined to be a fixture in every rap lover's collection.