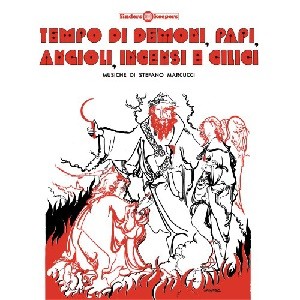 Imagine Jean Pierre Massiera’s Visitors rescoring a scene from ‘Juliette Of The Spirits’, backed by a skeleton staff from Jean-Claude Vannier’s ‘Chorale des Jeunesses Musicales de France’ on a foreign exchange program, on Halloween, in the Vatican.

Instantly recognised by Flower Records founder Romano Di Bari as having commercial potential beyond its handful of church and small theatre performances in the early months of 1975, Marcucci agreed that they should commit these bizarre recordings to vinyl as a form of preservation with hope of attracting a wider commercial audience through Di Bari’s Television and Films synchronisation contacts. Sitting slightly ajar to the custom-made projects of its label bedfellows (swapping schedules with experimental theme-music by Alessandro Alessandroni, Gerardo Iacoucci and Anthonio Ricardo Luciani), this album has slipped under the radar of many Library label completists over the years attracting confusion, scepticism, polarised opinion but nothing short of astonishment at the bizarre hidden synth-ridden psychedelic concept pop found behind some of the most striking duo-tone artwork to come out of Italy’s most experimental era.

Original copies of this highly sought after library disc fetch in excess of £300 on certain internet auction sites.