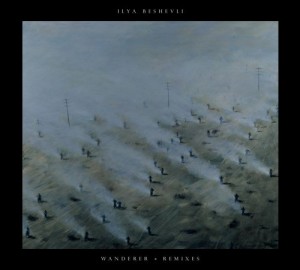 Ilya Beshevli’s sophomore album ‘Wanderer’, released in May 2016, gets a reworking of the title track by Dutch lo-fi house producer Kai Hugo aka Palmbomen as well as minimalist composer and labelmate Ryan Teague, whereas Simian Mobile Disco remix focus track ‘The Traveller’s Night Song’.  The SMD rework on Side-A is a woozy warped-keys rework of the original, with throbbing kick drums and cosmic echoes swirling around the stereo field. Starting with driving pitched kicks and a faded melodic trill working its way to the forefront before introducing both rhythmic and (later) melodic counterparts. Half Way through and it descends into some echoey melodic black-hole before kick-starting the part with an anthemic and triumphant ambient electronic climax. Move into the latter half of side-A, and there is a perfect juxtaposition to the dancefloor ready vibes on the opener in Palmbomen's remix of 'Wanderer'. New-age pads and woodwind-esque squeals are thrown together with aplomb, whilst giving way gradually to an ever encroaching melodic foundation. Half-way through and a resonant 303 rips its way into the mix, slidding and shimmering about the place, before coaxing the formerly meek ambience into some sort of distorted empathy. On the flipside, the epic Ryan Teague remix displays the sort of arpeggiated electronic ambience you might expect from Ricardo Donoso or Ulrich Schnauss before scraping and droning into a skittering rhythmic glitch. Highly melodic, but littered with artifacts (tape-stop/beat repeat etc) pulling and pushing at the established foundation whilst still retaining a cohesion and dedication to the source material. An excellently curated trio of tracks here, remaining true to the spirit of the original, whilst forging a new path for the outer boundaries of the sound.

Barry says: A perfectly flowing, and warmingly cohesive set of remixes from Ilya Beshevli's stunning 'Wanderer'. From cosmic electronic, to new-age with a bit of acid thrown in for good measure. A perfect digital counterfoil to the acoustic drive of the original.