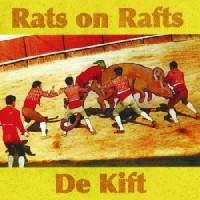 The best act I've ever seen at a festival" Paul Thomson, Franz Ferdinand. Rats On Rafts have joined forces with legendary underground Dutch punk band De Kift - Zaandam punk vs Rotterdam punk! A playful revisioning of each other’s music which began at Metropolis Festival in 2013. The record brings together songs from Rats On Rafts critically acclaimed second album ‘Tape Hiss’ and De Kift’s huge catalogue. The two bands locked themselves up for a month to record a completely analogue album. Together they will play this material live on tour. Instantly recognisable as Rats ‘Last Day On De Zon’ is shot through with brass - enter De Kift. Dark, dub infused ‘Meggy’ sees Rats bringing their explosive and unrelenting rolling crescendos. ‘Sleep Little Links 2 3 4’ is uplifting with the addition of brass whilst folk tinged ‘Dit Schip’ sees them bring further depth to the collaboration. Energetic and raw, the spirit of their festival performances prevails throughout. De Kift have released music for three decades with father Heijne only retiring in 2013, brothers Marco & Ferry Heijne and cousin Pim remain alongside co-founder and drummer Wim. The nine piece brass ensemble have released eleven albums, collaborated in theatre, film and various media projects which has seen them win a number of Dutch awards across film and music. Both formats have unique sleeves made from recycled LP/CD sleeves, with the front and back cover printed and stuck on to the recycled sleeve. The band have assembled and fulfilled each one themselves.

The Honeymoon SuiteCalm Your Little Passions