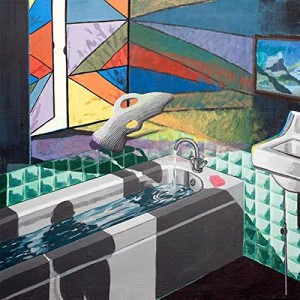 The long-awaited follow-up to 2012’s best-in-show 'Persistent Malaise' offers at least 33.3% of its buffet to shimmering, inward, mulch-heavy ballads — ‘A Change of Course’, ‘The Shaping of the Dream’, ‘Murmur of the Heart’ — showing a sensitivity that inevitably does nothing for the craft beer revolution. If truth be told, the remaining 66.6% threatens to look equally indifferent when served on a wooden board or beside a miniature stainless steel plant pot of hand-cut triple-cooked fries, but such is life.

These songs are mostly about discouragement and the black dog, the tepid whines of self-inflicted unemployment, the repetition of life’s repetitions, the creative dormancies of romantic contentment. Disappointingly there lies no outward mention of pop-up launches, sides of ‘slaw, chakra schools, the urban woodsman or an allusion to an artisan approach.

Across its 38 minutes, the 'The Hanging Valley' instead covers such further peripheral subjects as the imperceptible bow towards the thirty-something honours list, the vacuous, rising diphthong of the inner-city commute and the suppressed rush of blood towards vainglorious internet smear.

‘Now a quartet of fraternal pedants’ whimper the band’s dusty social media accounts in reference to the twilight addition of Lindsay Corstorphine on the bass guitar, ‘cascading down the woodwork, slapping the pegs’ as he goes, dear reader. In truth The Hanging Valley owes us much to Corstorphine’s ample stringmanship as his encouragement toward loosening the conservative shackles of olde. Certainly a weakening of the old guard has taken place somewhere, the gamut of emotion ridden more obliquely and less shamefully now. Ballads stare teary-eyed out of windows towards rain-swept rivieras, vocals and guitars have pulled themselves gamely out of the reverb-soaked hollow and those ‘for the rockers’ — ‘Slippery Slopes’, ‘Severed Estates’, ‘Fugue States’ et al — no longer grasp for the safety of the halfway house but aim for the stars. ‘More sherberta tambourine’ they cried in the studio, and more sherberta there was.

Between late 2012 and early 2013, both Fisher brothers, Patrick and Oliver, relocated to independent lodgings in the predictable London borough of Hackney whilst Dan Reeves remained in the coastal enclave of Brighton & Hove, West Sussex. Sporadic melody-making sessions between Fisher, O and Reeves had already cemented the nucleus that would become The Hanging Valleyby the time ‘live music fans’ hailing from the East of England were sent o’er the moon upon the announcement at a press conference at Leyton Orient’s Brisbane Road stadium that LAC (nee Lindsay Alexander Corstorphine) had joined the band in a full-time four-string capacity. Legend says his controversial initiation had taken the form of a gruelling 5 (five) day tour throughout some of the Benelux’s most scenic highways and byways.

During a long weekend in Barcelona in February 2014, the new quartet spent Valentine’s Day together and cycled along the seafront as far as the Nova Mar Bella before playing a passable show the following afternoon. The paparazzi hubbub covering the mini-break was soon to be eclipsed by the announcement that Reeves was to become a father for the first time. Fittingly, Dan was only ever one letter away from Dad, and so it proved, when, following the ‘locking down’ of each of The Hanging Valley’s nine precious numbers at Mark ‘Mug’ Jasper’s Sound Savers studio in predictable Homerton in early October 2014, Reeves abandoned the limelight in order to assist upon seeing young Elliot into the world. At his son’s launch event at Brighton’s Churchill Square shopping centre Reeves was heard to exclaim that his would be ‘a lifetime of experience, bleeding from the speakers’.

1. Slippery Slopes
2. Open Mouth Dusk
3. A Change Of Course
4. Severed Estates
5. A Human Pattern
6. The Slump
7. The Shaping Of The Dream
8. Fugue States
9. Murmur Of The Heart