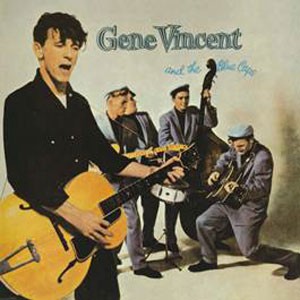 The second LP from Gene Vincent and The Blue Caps, a self-titled affair, was recorded in October 1956 a mere 4 months after the band's debut. Again featuring the searing guitar work of Cliff Gallup, this album shows Vincent at his most mature and confident. The band was capable of running circles around basically all white rock and roll groups around at the time and this LP showcases their depth and breadth fantastically. Featuring amazing originals, one of the more brilliant covers of The Righteous Brothers' "Unchained Melody", and a haunting version of The Delmore Brothers' "Blues Stay Away From Me", Gene Vincent and The Blue Caps is necessary for all fans of early rock and roll.

A1 Red Blue Jeans And A Pony Tail
A2 Hold Me, Hug Me, Rock Me
A3 Unchained Melody
A4 You Told A Fib
A5 Cat Man
A6 You Better Believe
B1 Crusin'
B2 Double Talkin' Baby
B3 Blues Stay Away From Me
B4 Pink Thunderbird
B5 I Sure Miss You
B6 Pretty, Pretty Baby