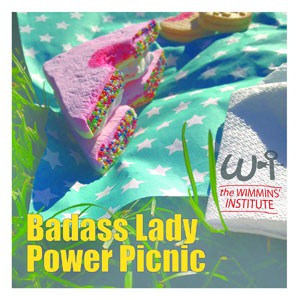 The riot grrrls have grown up. And their music just gets sassier. Former Melody Maker journo Ngaire Ruth sums up The Wimmins’ Institute to a T: “The Raincoats meets Throwing Muses, with an individual down-to-earth humour that shows these women live their ordinary lives with extraordinary flair, wickedness and good grace.” (Louderthanwar.com) By this she refers to their songs about caesarean sections, mansplaining, and mother-in-laws. Wry humour in awesome punk-pop.

This all-woman supergroup has only been together as a band since April 2015, however they are all ͚old hands͛: Jen Denitto and Deb Van Der Geugten were in seminal riot grrrl band Linus in the 90s, and Cassie Fox and Melissa Reardon are also in Thee Faction, the notorious ͚socialist R’n’B band who wowed this summer’s Leftfield stage at Glastonbury. Charley Stone (of Salad, Gay Dad, Ye Nuns amongst many others) produced the album at Dean Street studios in Soho, and frequently joins the women on stage as guest lead guitarist. Cheerfully DIY, the Wimmins posted a few CDs out to the media, and have had a flood of glowing reviews back.