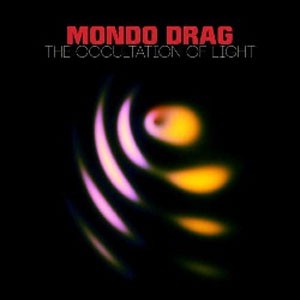 It’s no minor thing to pack up and leave your home. Heavy psych mavens Mondo Drag relocated from Iowa to Oakland, California, after recording their self-titled second album (released on RidingEasy in 2015), and the move is central to understanding the progressive turn that their third record, The Occultation of Light, represents.

“Each of our albums has directional changes in songwriting and this third chapter is no exception,” says vocalist/keyboardist John Gamino. “Since moving to Oakland, we’ve been privy to the large amount of music that flows through a major cultural center. We’ve seen legendary acts like Magma, King Crimson, Goblin, and Yes. We are always trying to expand our sonic range and we definitely explore some new areas on the new album that we’ve not been to before.”

Most of The Occultation of Light was recorded live, tracked and mixed on analog tape by Phil Manley (Trans Am, The Fucking Champs) at El Studio in San Francisco. Mondo Drag had just come off the road after a month out with labelmates Electric Citizen and Slow Season, and their stage-honed, hard-won chemistry bleeds into every second of the record. Songs are warm, psychedelic and grooving, but have a poise born out of classic prog as well. And as much as their new home is a factor, that just wouldn’t be possible without the road time.

“Since moving to Oakland in Spring ’13, we’ve been developing and playing out the material that now comprises The Occultation of Light in San Francisco and Oakland,” Gamino explains.

Born out of a tumultuous history of varied lineups and geography since the release of their 2010 debut, New Rituals, Mondo Drag realize a defining moment with their third offering that builds on their past accomplishments even as it embarks boldly on new era for the band. Tour plans for 2016 are forthcoming.