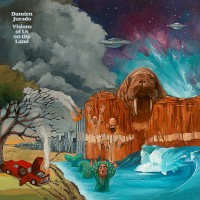 Providing the ideal entry point for neophytes and an intoxicating aural high for the faithful, Damien Jurado’s new opus extends the hot streak ignited by 2012s Maraqopa and its 2014 follow-up Brothers and Sisters of the Eternal Son. Cut once again with label mate and super producer Richard Swift at the latters National Freedom recording facility in rural Oregon, Visions of Us On The Land, out 3/18 on Secretly Canadian, completes the tale of an individual who has had to disappear from society in order to discover some universal truths. Today, we’re excited to share the song “Exit 353,” premiered by NPR Music.

There was no grand scheme to make a trilogy at the outset. Exuberantly prolific, its creator simply wanted the first record to be “a quick snapshot,” says Jurado. “Maraqopa is this peaceful place I can go to in my mind. A little bit psychedelic, but youre not using substances. The brain is such a powerful thing. In that uncharted territory I was able to tap in and find this place. Which was called Maraqopa. Similar to the fictional towns in television or books.”

Maraqopa the album introduced a character deliberately unnamed, intended to represent anyone feeling that way who stumbles upon the titular locale then gets into a car crash… which only frees him further. Brothers and Sisters of the Eternal Son. It picked up the narrative after the accident, in a commune inhabited by Silver Timothy, Silver Donna, and Silver Malcolm. Visions of Us On The Land journeys further into the subconscious mind, a symbolic road trip spotlighting the people and towns that our central figure and his travelling companion, Silver Katherine, encounter upon leaving the commune. Hence the capitalized track titles, alluding to real American locations refracted through ones third eye in the rear view mirror. Like all great art, its about life and death and love and freedom. A sonic map with no set destination, revealing more with each ride.

Andy says: I was a massive johnny-come-lately with this guy, whilst my shop customer-friends had been extolling his virtues for years. Well, they were right! This is proper, deep, cavernously produced Americana with a subtle psych twist, and again, just huge, huge songs throughout. There's a lot on here and it is all good. Now for his OTHER ten records!!