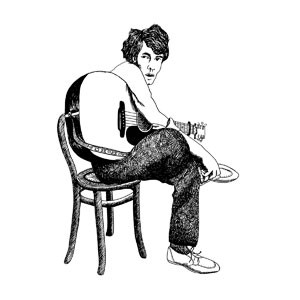 Available on vinyl for the first time, included download code. Inspiring generations of musicians, Scottish guitarist and songwriter Bert Jansch will be forever known as a remarkable talent and a leading figure in the British folk revival. He came to prominence in the 1960s becoming widely known for his exemplary guitar technique and innovative blend of folk, blues and jazz. Later he became a founding member of folk super group Pentangle before returning to his solo career. Led Zeppelin, Bob Dylan, Paul Simon, Donovan and Johnny Marr have long been fans. Reaching people far and wide, Bert deservedly received many accolades for his contributions to music including the Lifetime Achievement Award at the Radio 2 Folk Awards and a MOJO Merit Award.

‘Live at the 12 Bar’ was recorded in 1995 at the legendary London music venue and is a fitting tribute not only to Bert’s virtuosity but to this renowned hub for folk music and other genres. Bert’s meticulous performance brings together songs from ‘When The Circus Comes To Town’, released in the same year, along with the haunting reworking of ‘Blues Run The Game’ (written by Earth’s own Jackson C. Frank) and traditional folk songs ‘Curragh Of Kildare’ and ‘Lily Of The West’ which were staples in Jansch’s repertoire. ‘Live at the 12 Bar’ captures an intimate gig that’s richly brought to life by his spellbinding ability to hold a room. The warmth and reverent silence from fans reminds us of what it was like to attend his shows and the true legend that we have lost. Two decades after its first release, ‘Live At The 12 Bar’ is issued for the first time on vinyl. This exceptional record is the first release in Earth Recordings’ new extensive reissue series of Bert Jansch catalogue.

“One of the most innovative instrumentalists of the twentieth century in the folk rock canon” The Quietus.

Peerless in his consistency of making astonishing records” All Music.