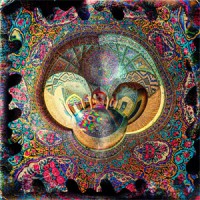 Williams is highly influenced by the archetypal forces of ancient initiation, multi-religious symbolism, and Jung's take on psycho-analysis. He interweaves these ideas into a vacuum of supernatural and futuristic realms of sound & colour; aiming to create a paradoxical menage of “sonic matrices” deliberately designed to have a beneficial psycho-physical effect on the listener. It is the singular sound of a restless creative scrying these concepts to conjure a uniquely personal & intuitive experience.

The interactive visual elements for each song on the album create a constellation of simulated synesthesia, impressions of multi-sensuous realms beyond the senses. Williams employed scientific illuminism (the method of science & the aim of religion) in the process of creating the virtual worlds as well as soundscapes – to generate an entire mysterious planet of harmony & equilibrium.

His music’s amorphous sensation is a constant across all Williams' artistic mediums. He has exhibited his similarly ethereal art across New York, Los Angeles, Berlin, and Seoul, and created official videos for Unknown Mortal Orchestra, Tears For Fears, Young Magic, and Dub Thompson.

Vinyl Williams on Into:
“Into’ was made to help subconsciously stimulate as well as soothe the listener into a critically neutral / balanced mental state. The main technique employed was through the incorporation of opposites into the sound & visual, such as meditative abrasiveness.”

Williams is the grandson of film composer John Williams and the son of Mark Towner Williams, drummer for Crosby, Stills, & Nash, Tina Turner, and Air Supply; his mother Leah was a classical pianist. He grew up in a Mormon community in Utah, USA. As a direct reaction to religious dissonances experienced in Utah, he has experimented with audio as a pragmatic healing tool. He also created one of the world’s first truly interactive music videos (players could explore an environment and manipulate individual elements of audio with their movements.