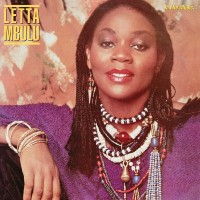 Originally released in South Africa in 1983, 'In The Music... The Village Never Ends' is one of those holy grail African records that barely needs any introduction. Featuring the enormous 'Nomalizo', it's a record that aficionados around the world have been waiting many years to get hold of. Now, Be With Records proudly presents the hugely anticipated vinyl reissue of this bonafied classic.

This release is officially licensed and has been lovingly mastered for vinyl by Simon Francis (Claremont 56 mastering engineer) It has been pressed on audiophile 180gram vinyl for the first time and features the original, rarely seen artwork.

South African singer Letta Mbulu possesses one of the most beautiful voices the world has ever known. Her immaculate voice emits a sweetness that radiates from deep within, brimming with a joy of life and inspiring a spirit of hope and happiness. On this album, her voice soars over a strident musical force that veers between disco, soul and pop music of the most incredible kind. The gleaming guitars recall disco's finest hours while the thump of the beats anticipate 80s British soul.

News of this limited reissue has already been causing a significant stir amongst those in the know so do not sleep on this - you have been warned!