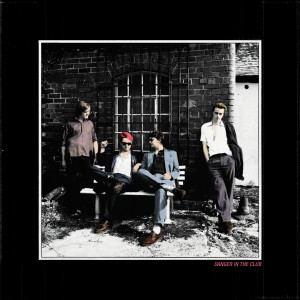 Two year’s on from the release of their debut, top 10 UK charting album ‘180’, which NME declared to be ‘the new soundtrack to your life,’ Q Magazine ‘one of the best debut albums of the decade’ and The Quietus ‘fucking brrrilliant,’ Palma Violets have announced the full details of their highly anticipated follow-up ‘Danger In The Club’. The album was produced by John Leckie (Stone Roses, Radiohead, The Fall), recorded at Rockfield Studio in Wales and is released on Rough Trade Records.

Anyone lucky enough to catch Palma Violets road testing the new album at intimate UK venues recently (including Scunthorpe where the local rugby team had to be called in when the venue’s bouncers couldn’t handle the over-excited crowd) can testify that the new material is a giant step up from the band’s debut. ‘Girl, You Couldn’t Do Much Better On The Beach’ and ‘Hollywood (I Got It)’ build on ‘180’s exhilarating, primal rock and roll, whilst the hook-heavy choruses and imaginative lyrics of ‘English Tongue’ and ‘Coming Over To My Place’ demonstrate how much Palma Violets - still all in their early twenties - have developed into first class songwriters and honed their own unique sound.

Speaking about the new album, bassist and singer Chilli Jesson explains:
“We wanted to make a young-sounding record. We listened to a lot of pre-punk while we were making the album. We like its rawness and simplicity. A lot of bands want to over-complicate their second album, we know that we didn’t.”