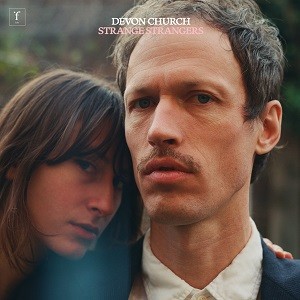 Devon Church is a singer-songwriter hailing from Winnipeg, Manitoba and based in New York City. He was, for many years, a multiinstrumentalist, co-writer and producer of the dreampop duo Exitmusic, whose album, Passage (Secretly Canadian), Pitchfork described as “insurgent, cinematic, and sometimes brilliant.” In 2018, the same year that Exitmusic released it’s swan song, The Recognitions (felte), Church released his solo debut, We Are Inextricable (felte), which employed the textural electronic elements he had harnessed during the Exitmusic years in the service of a songwriting style rooted in the folk rock tradition, with deep nods to Cohen and Dylan. The results, according to Allmusic, were both “affecting and musically inventive.” Having gigged throughout the US in 2019 (opening for the likes of Orville Peck, Adam Green, Kirin J Callinan and Black Marble) Church set to work recording his latest offering, Strange Strangers, while seeking refuge from the global pandemic in a barn in rural Pennsylvania.

The album’s opening track, “This is Paradise (But Not For Us),” is an ironic complaint sung by an itinerant Adam & Eve to their absent father, a kind of gnostic protest ballad in waltz time. It sounds as if Apollo-era Eno had wrested the controls (and the handgun) from Phil Spector halfway through the recording of Death of a Ladies Man. The atmospheric elements of Church’s past productions are sublimated throughout the album, put into the service of tape-saturated vocals, combo organs and guitars. His voice, grown more confident and understated since his debut, still ranges from a laconic Lee Hazelwood hangover to a smoky Tom Waits growl, but it smooths out nicely on tracks like the intensely melodic and propulsive ”Flash of Lightning in a Clear Blue Sky.” Angelic backing vocals by Church’s partner, the artist Ada Roth (who also co-directed two delightfully strange videos for the album) lend an aura of dreamlike lightness in contrast to the baritone of the album's world weary narrator. When, in hushed tones reminiscent of Hope Sandoval, Roth comes to the front of the mix to deliver a lyric like “We’re so bored of the apocalypse,” things take a subtly menacing turn toward pop surrealism.

A sense of cosmic black-humor has crept into Church’s lyrics, which deal with a sort of bewildered pilgrim’s progress through various spiritual and material Bardo states. "Jesus was a genius," sings the Adam character in This is Paradise, "but I prefer his early stuff." On ”What is Consciousness?/St Teresa,” a suite featuring arpeggiated analog synths and slide guitar by indie rock virtuoso Delicate Steve, Church answers the question, "What is consciousness?" with the wry formulation of the Tibetan crazy wisdom teacher Chögyam Trungpa: "Mostly your bad habits." And on the languidly psychedelic ”Slouching Toward Bethlehem,” in the midst of a string section and what sounds like a choir of monks, Church reflects lysergically on selfhood itself:

Strange Strangers borrows its title from the eco-philosopher Timothy Morton: ‘The strangeness of strange strangers is itself strange, meaning the more we know about an entity the stranger it becomes.’ On Ephemera, Church seems to lament the mysterious unknowability of these objects of our deepest desires and fears, but he does so with defiant exuberance, his ecstatically strummed acoustic guitar threatening to go off the rails. “I was weary and you took me in your arms," he sings to the other (a lover, a god?). "I couldn’t see you, but you held me like the light holds the dark.”