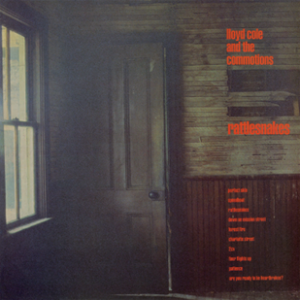 Signing to Polydor Records, the group's debut single, Perfect Skin, was released in early 1984 followed in October of that year by their debut album, Rattlesnakes. Produced by Paul Hardiman with strings arranged by Anne Dudley, it became one of the most cherished albums of the 80s. Including further singles Forest Fire and the title track, the group found themselves as the darlings of the music press, at a time when a university education was still a relative rarity. Cole wasted little time in cramming cultural allusions in his material – listeners were introduced to a world of Norman Mailer, Eva Marie Saint and Truman Capote, all wrapped in delightfully written pop music.

Perfect Skin
Speedboat
Rattlesnakes
Down On Mission Street
Forest Fire
Charlotte Street
2CV
Four Flights Up
Patience
Are You Ready To Be Heartbroken?

Lloyd Cole And The CommotionsMainstream - 2023 Reissue