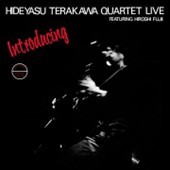 In the finest tradition of BBE Music’s J Jazz Masterclass Series, we have a real obscurity of quality to savour. Taken from the rare 1978 private press album ‘Introducing’ by the Hideyasu Terakawa Quartet featuring Hiroshi Fujii, this private press gig recording was originally released in less than 100 copies. This BBE Music edition is the first time this very rare album has ever been reissued. Led by saxophonist Hideyasu Terakawa alongside bassist Tetsuo Miura and drummer Aki- hiro "Thunder" Nakaya, the album was recorded live in concert as Terakawa stopped by at the jazz spot DIG in Masuda City, Japan, on the first of a seven-day regional tour in October 1978. Joining the trio was the featured guest, vibist Hiroshi Fujii. According to Fujii, “a special label, Red Horison, released only this one album and it was sold at a few local record stores and available for sale when we played live. After this live recording, I did not perform with Terakawa again.” The current whereabouts of saxophonist Hideyasu Terakawa remain a mystery but we are delighted to be able to present this wonderful album to a new audience. Unlike previous J Jazz Masterclass releases, the album contains no original compositions but rather fascinating interpretations of material by leading American jazz composers such as Wayne Shorter (Black Nile, as featured on J Jazz vol 3), Frank Foster (Simone) and Milt Jackson and Jimmy Heath (Rerev).