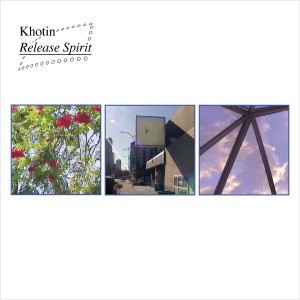 Canadian producer Dylan Khotin-Foote has kept his Khotin alias going for the better part of a decade; the impressionistic electronic project shifts with the movements in his life. Sometimes it leads, like when the club-friendly grooves of 2014’s Hello World immersed him in the heart of Vancouver’s underground dance scene, and sometimes it follows, like 2018’s Beautiful You, a downtempo salve for DJ fatigue. His melodic sensibility and playful ear for atmosphere remain the rippling core of the project’s fingerprint; whether beat-driven or ambient, a foggy smear or a dusted and pristine print, a Khotin track has a distinct and instantly recognizable swirl. During and after the 2020 release of Finds You Well, his second LP on Ghostly International, Khotin-Foote settled back into a slower vibe in his hometown of Edmonton. Even before the pandemic, his pivots to softer production, and away from DJing, left him with fewer opportunities in Vancouver and club bookings overall, and as a self-identifying introvert, he was fine with that. But the change of pace did open space for Khotin-Foote to grapple with concepts of adulthood and career. At his lowest, he almost walked off this musical path altogether; instead, he doubled down on the craft — the tone, pacing, and dynamism of new material — arriving at a definitive full-length. With Release Spirit, Khotin releases himself from the pressure of expectation, fusing and refining everything we know about his music. The warmth and familiarity of Khotin’s dreamy, dulcet style meet new ideas and frameworks, a natural progression, a modest revelation; Khotin confirms it is okay to move slowly and he’s never sounded better doing it.

The album title borrows from the “release spirit” mechanic in the video game World of Warcraft. When players die, they are prompted to release their spirit and return as ghosts to find their corpses and come back to life. Khotin sees it as a worthy metaphor for the impending change his return home presented and the resulting process of purging artistic expectations to find his creative self again. On this go-around, he is freer, more playful, and more intentional within his palette of warped synth, breakbeats, and piano sounds — including the classic Casio SK-1 presets he’s used since the start — mingling with wistful samples, field recordings, and other abstract snippets. For the first time, he enlisted Nik Kozub to do the mix and assist with sequencing. Khotin-Foote has long worked with the Edmonton-based musician and engineer in the mastering phase, as well as their days co-running the label Normals Welcome, and this time was able to involve his ears earlier given their newfound proximity. “I think it’s my best sounding record to date.”

We begin on “HV Road” or Happy Valley Road, where Khotin-Foote spent time during a family vacation in British Columbia’s Okanagan Lake. His plans to record crickets at night are quickly foiled by his younger siblings; the cute exchange orients the listener to a core memory of sorts, setting the tone of universally understood warmth and wonder that has defined some of Khotin’s most transportive tracks. Hazy percussion takes hold, and we are swept further into the wisp of “Lovely,” a grooving, melodic standout built on the interplay between the beat and human voice-like hums. Khotin knows this zone well; equally suited for a reverie or a club warm-up.

The bubbling atmosphere and absurdity of “3 pz” offer a cosmic/comic interlude and also speak to reflections on his family’s move to Canada two generations ago, and the audio tutorials they used to learn English. “I can only imagine my grandparents repeating some of the bizarre phrases.”

“Fountain, Growth” finds Khotin in collaboration with Montreal’s Tess Roby (Dawn to Dawn) for the project’s first-ever vocal track. Roby’s soft cadence echoes atop spiraling air pockets of rhythmic production, lending a breezy, almost shoegaze pop feel. Throughout the single and the album, wind gusts between the compositional layers, akin to the roaming spirits of its namesake, curving around the birdsong of “Life Mask” and seamlessly reaching “Unlimited <3.” The latter bumps in slow motion; disembodied whirrs from his Casio collide with 808 drums and sub-bass for a vibe that teeters on trap and instrumental hip-hop.

Release Spirit rests in a dream sequence. Oscillating synth lines dance around the heartbeat of “Techno Creep,” a hyperactive REM state before the digitized ambient sprawl of “My Same Size.” In the final pass, Khotin imagines transcontinental travel from the glow of his screen. He recorded “Sound Gathering Trip” to soundtrack a genre of YouTube videos he’s taken to that follows train routes through Europe and Japan. The scene is serene and moving; piano keys warble as static-filled sound design shimmers off the rails, from cityscapes to the countryside, an introspective ride through a world beyond his bedroom. It doubles as an apt parting image for Khotin’s project as a whole: dreaming big but happiest when riffing on the details, shaping environments from the inside out. Over the last decade, he has stretched from his core in Edmonton, leaving a trace in Vancouver and beyond; but when all signs point home, he loops back to see it all from a different vantage, revitalized, refined, and free.