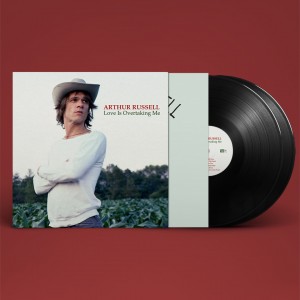 ‘Love Is Overtaking Me’, originally released in 2008 comprises 21 demos and home recordings of unreleased pop, folk and country songs from Arthur’s vast catalogue. While much critical and popular affection for Russell’s music has come about well after his untimely death from AIDS in 1992, many fellow artists believed in his genius and were drawn to collaborate with him during his lifetime. The legendary producer John Hammond (Billie Holiday, Bob Dylan, Bruce Springsteen) recorded Russell on several occasions; a number of these recordings can be heard on ‘Love Is Overtaking Me’. Alongside songs recorded with various incarnations of The Flying Hearts, a group formed by Russell with Ernie Brooks whose shifting line up included, by turns, Jerry Harrison, Rhys Chatham, Jon Gibson, Peter Gordon and Peter Zummo as well as Larry Saltzman and David Van Tieghem. Several other Russell projects are represented on Love Is Overtaking Me, including The Sailboats, Turbo Sporty and Bright & Early.

Compiled from over eight hours of material, ‘Love Is Overtaking Me’ reaches back further to Russell’s first compositions from the early `70s and spans forward to his very last recordings, made at home in 1991. Chris Taylor of Grizzly Bear contributed mixing, restoration and editing to the album, whose tracks were selected by Audika’s Steve Knutson, Ernie Brooks and Russell’s companion, Tom Lee. Several songs feature prominently in Matt Wolf’s film ‘Wild Combination: A Portrait of Arthur Russell’.

Extensive ‘Love Is Overtaking Me’ liner notes by Tom Lee provide an intimate perspective on Russell’s diverse catalogue, which spanned an extraordinary diversity of styles and won the love of artistic communities that would seem utterly disparate, from Philip Glass, John Cage and Allen Ginsberg to rock bands like The Talking Heads and The Modern Lovers; the pre-Studio 54 disco-party scene of Nicky Siano’s Gallery and David Mancuso’s Loft; and DJ-producers like Francois Kevorkian and Larry Levan, among others.

Side B
I Couldn't Say It To Your Face
This Time Dad You're Wrong
What It's Like
Eli
Hey! How Does Everybody Know

Side C
I Forget And I Can't Tell (Ballad Of The Lights Pt. 1)
Habit Of You
Janine
Big Moon
Your Motion Says
The Letter