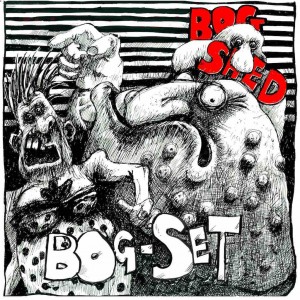 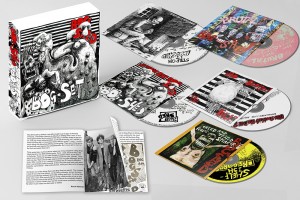 At the beginning of the year it was reported that Tesco was phasing out CDs and DVDs in its UK stores, with plans to stop selling physical media altogether by the end of February 2022. So obviously the time is right to finally commit Bog Shed's recorded output to CD (and digital platforms) for the first time.

The band formed in 1983 and over the next four years released their debut EP Let Them Eat Bog Shed, followed by two albums; Step On It and Brutal, as well as a compilation of their John Peel Sessions (Tried & Tested Public Speaker, originally a 6-track EP). The version of Tried and Tested Public Speaker released here features 20 of their John Peel session tracks, 14 of which have never before been released.

Mike and Mark were born in Liverpool in 1961 but met at school in Ormskirk aged 9. Their 70s were T.O.T.P, Top 20, Fluff Freeman, John Peel, Probe, Eric's and the peculiar hippy/ punk crossover of the free festivals. Every Saturday they would play rubbish guitars through a home made amp. After leaving Polytechnic Mike and Mark moved to Hebden Bridge soon to be followed by Phil who moved into Northwell Cottage in Heptonstall. This was an ideal space to play and rehearse. Stone-built and clinging to a hill with the toilet in a shed down a steep path next to a well for your water.

Drummers were tried, but were either temporary or just plain wrong. Tris, who befriended the others drinking in the Trades Club, got the job having never played the drums. The Bradford gig on Who Scoffed The Trill? was 2 weeks later and these live songs are early tunes that never got recorded. There were many more, but C90's got recycled and we will never again hear Open Up In The Name Of Fred Feast or I saw Cleo Laine In A Phonebox. Who Scoffed The Trill?'s 22 tracks are exclusive to this box set and won't be available on streaming platforms.

Their debut EP Let Them Eat Bog Shed was released on John Robb's Vinyl Drip label in 1985 and led to their track Run To The Temple appearing on the NME's now-legendary C86 cassette. However, this was the age of DIY and Phil decided they should be even indie-er and start their own label, Shelfish, having declined offers from the Creation and Abstract labels.

Phil was technically the best musician in the band, he could play and sing every Beatles song. John Robb describes him and the cottage, 'A total one-off, Phil was a Stanley Baxter lookalike with flared nostrils and a flared mind who was funny as fuck and had a brilliant quirky worldview. His house was an extension of his unique personae. Every morning at breakfast a horse from the neighbouring field would poke its head through the kitchen window and nibble bits of toast and listen to the clatter of cans being swept up.'

Phil still organised gigs in Britain and Europe but the well-known stresses of travelling in the back of a van for miles and miles to be manic for an hour started to tell. What had been creative tension just became tension So in 1987 it stopped. Phil died of throat cancer in 2006 having fallen out with Mark and Tris. Tris went on to play with A Witness before joining Jackdaw with Crowbar. He played in many side projects on a variety of instruments until he died of brain cancer in 2008. Mike still draws and came up with the new sleeve artwork.

CD5 – Who Scoffed The Trill?
1 Budgies
2 This MUST Be Taken Seriously
3 Necktie Murder Shopping Trollies
4 Gathering Change
5 Proper Music
6 You Are This
7 Too Many Personalities
8 The Amazing Roy North Penis Band
9 Hardly Manky
10 I Feel Like A Thing
11 Are You Alive
12 Thankyou Horse
13 Pain Is Nice
14 Lodger Problem
15 Piano Vocal Easy Organ
16 I Taste Little Windmill
17 I Prayed In Your Parlour
18 Monument
19 Soon To Exist
20 Oh Regulation!
21 Sunday Man
22 My Little Heart's In A Whirl
23 Simple Spinal
24 Runner On A Blunder