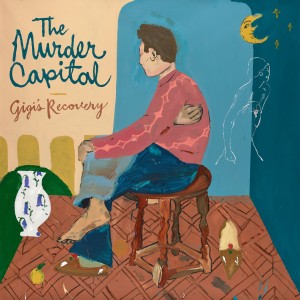 The Murder Capital’s first album ‘When I Have Fears’ had all its songs written and recorded within the first 9 months of the band knowing each other.

Now, with ‘Gigi’s Recovery’, the band had to learn to navigate their personal relationships through the relationships they harnessed with these new songs. Without knowing what these songs would sound like, the band knew what they wanted them to feel like- and worked backwards from there - “We had this slightly tongue-in-cheek mantra at the near-beginning of writing this record, it was - The evolution will not be compromised. This kept us on a course, even when we didn’t know where we were going”. And that’s exactly how The Murder Capital ended up with an album that is both totally pure and yet completely confident in its direction.

Liam says: Easily one of my most anticipated records of the year, 'Gigi's Recovery' sees The Murder Capital firmly acknowledging and thriving within their musical evolution. Whilst their post-punk core remains solidly intact, 'Gigi's Recovery' sees the Irish quintet striding towards new sonic territories - with some tracks showing glimpses of post-rock and Radiohead-esque breakdowns. Frontman James McGovern poetic lyricism remains one of The Murder Capital's strongest attributes, commanding each track with hypnotic exposition. Full of passion and spirited urgency, but also moments of tender nuance, 'Gigi's Recovery' firmly plants itself as an early contender for one of best albums of 2023.