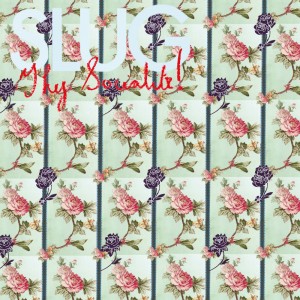 “I started to think about what I could do to challenge my own listeners,” says Ian Black aka SLUG. “And what would be my angle without just releasing 40 minutes of generic bad music?”

Although Thy Socialite!, the first release from Field Music’s new record label Daylight Saving Records, is not the sound of Lloyd Webber quivering and sweating in a rotting Berlin flat but instead, a fun, joyous, audacious record of hard rock, glam, and pop that ranges from arena to art school. “I wanted to include a more rockist palette,” Black says. “My last album, Higgledypiggledy, had influences including The Cardiacs, Prince and The Residents. For this one I wanted to see what I could get out of less indie audience friendly artists such as Toto, Sweet, Wings, Def Leppard and ZZ Top and merge it with a SLUG sensibility. Due to the more rock approach, I was happy for the album to become a big classic rock unit - pompous even.”

However, simply a pastiche and nostalgic throwback this isn’t. Despite the playful nods to some of the more grandiose, theatrical and overblown elements of the aforementioned genre, it’s also an album with a contemporary pop edge, slick production and a tangible connection to SLUG’s previous deft mix of indie, rock and art pop.

The result of all of this is an album that is fun and unpredictable but also conceptually smart, ambitious and adventurous. A place where classic hard rock and smart art-pop are treated equal, and where taking the piss doesn’t have to equate to being novelty or disposable. It was all part of the challenge that Black set himself from the off when he asked himself “how could I challenge the SLUG listener but bring them on a new fresh journey which will confuse them at first but they will ultimately love?”

For David Brewis of Field Music, it was the ideal first record to kick off their new label. "This seemed like the perfect start for Daylight Saving Records," he says. "We've always loved what Ian does and it's been a thrill over the years to help Ian dig these wild musical ideas out from his brain. Now we can have a hand in putting them into people's ears too."

Martin says: A reasonably bonkers, shockingly cohesive mashing together of spiky math-rock, dreamy prog and slick indie music that never strays far enough from the melody to be prohibitive. There are definitely echoes of fellow North-Easterner Richard Dawson here too and that's certainly no bad thing.

Side A
Insults Sweet Like Treacle
Please Turn It Up
Casual Cruelty
Instant Reaction
Honestly Subjective 'Bout Your Own Thing
Lovingly Legerdemain
Wow (Whatta Gurl)
Side B
Depends On What You Think Is Nice
Be A Good Martyr!
Settled With A Wink
I Love That Actually
Silly Little Things That We Do
Cut Of Your Jib