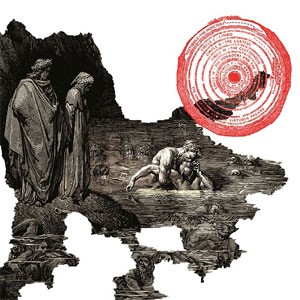 Circles Of Upper and Lower Hell is the grandest, deepest work to date by Polish-born, Glasgow-based sound artist and composer Ela Orleans. The seventh album under her own name, Orleans' expansive vision, loosely based on Dante's Inferno but infused with deep personal experience, incorporates sound art, orchestral textures, synth pop and electronic music to construct a world equally peppered with loss and inspiration. Circles Of Upper and Lower Hell pulls all the strands of Orleans' previous work together, an epic depiction of turmoil wide in scope but reveling in detail. From her beginnings inaugurating a lo-fi, homespun sound that has since developed fully into a language uniquely her own, from tentative live outings featuring multiple instruments to a now-masterly command of sound, Orleans has become one of the most consistently surprising musicians of the global underground.

"Circles" documents Ela's research into dark sonic interiors and a far more personal approach to conventional songwriting. Previously, Orleans' sonic textures have relied on samples cleaved out of context, buried songs beneath warped aural gauze, but Circles blows every element of Orleans' art upwards and further apart. Circles begins with a masterful, sparse composition, The Gate, that instantly showcases the expert mastering by Jon Brooks before melting into You Go Through Me (featuring Stephen and Katrina from The Pastels), one of the most direct, aching pop moments. Ghost and Whispers is a hit from another universe, a sparkling propulsion instantly recognizable as an Ela Orleans composition; light of touch and almost unbearably, ghostlily human. Circles Of Upper and Lower Hell is an honest portrayal of a descent; be it personal or metaphorical and there are times, like on the minimal, string-led Tower, when the listener feels submerged, alienated from comfort. Through-out there's a massive, cinematic scope to the album, rumbling synth textures escalating into celestial harmonies, the stereofield sparkling with sound, shimmering melodies crackling with the sort of pathos that Ela has made her recognisable trademark. It's a weighty journey, pitched aurally between Ghost Box records and a mournful classicism, drawing references from literature and autobiography.

Barry says: 24 tracks? Some short, some long... that would usually be a red light right there, but in this case, you'd be wrong. This is a cohesive and flowing collection, varied but with a similar ilk of instrumentation and drive. Electronic and percussive, but studded with acoustic elements. There are organs in there, pianos and guitar weaving through the fog of electric drone. On top of all that, vocals segue in and out, punctuating the chaos with divine melody. A skilled and meticulous construction of acoustics and electronics.